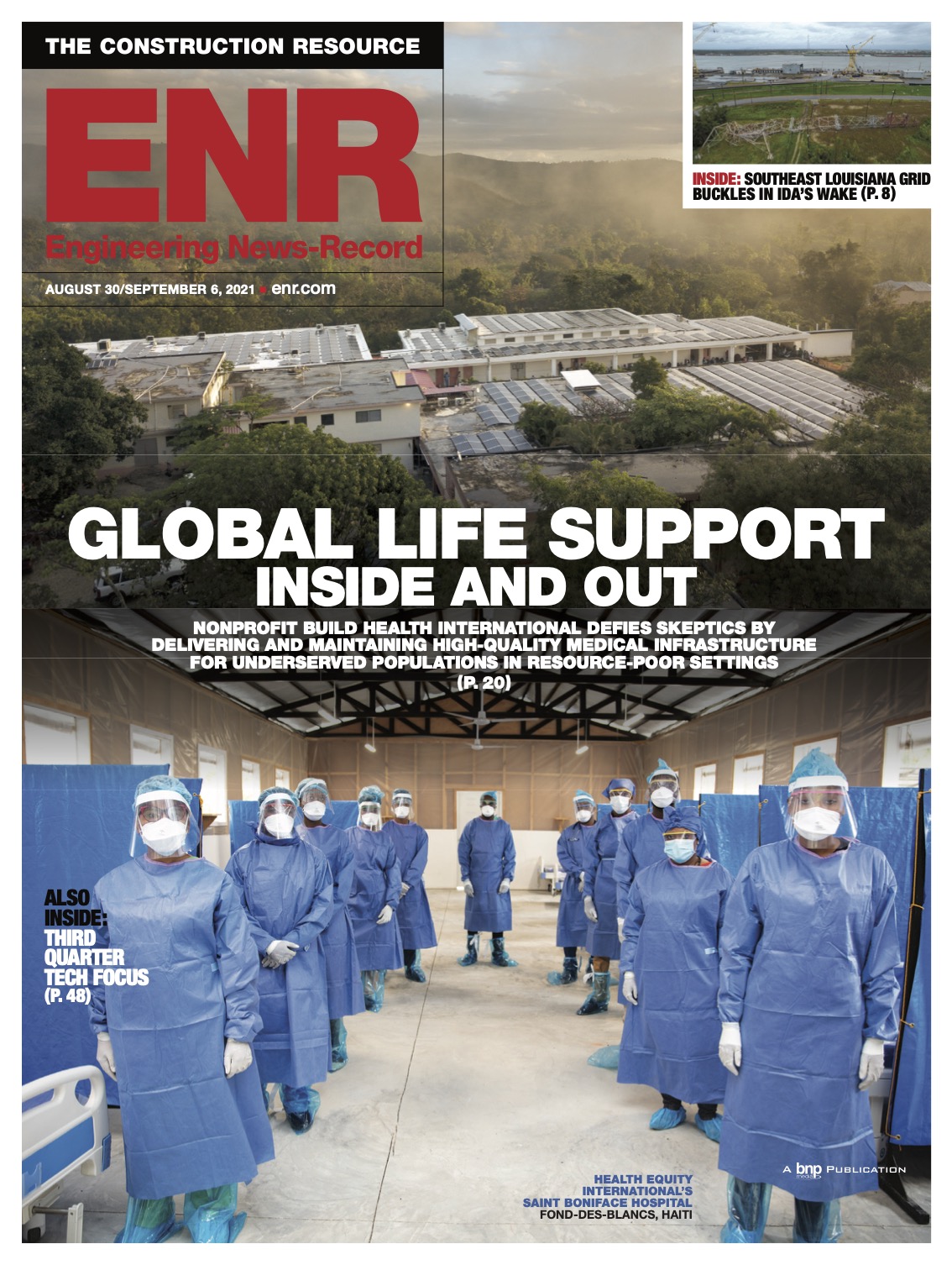 On Aug. 18, Build Health International’s Jaresiah Desrosiers landed at the airport outside the shaken city of Les Cayes in Haiti’s southwestern Tiburon Peninsula. It was four days after a magnitude-7.2 earthquake devastated the region, killing more than 2,200 people, injuring nearly 12,300 and damaging or destroying nearly 136,800 mostly one- and two-story buildings. And it was just two days after Tropical Depression Grace dealt another blow to the Americas’ poorest nation, which hasn’t recovered politically from the assassination of its president, Jovenel Moïse, on July 7. Desrosiers, who was joining the Beverly, Mass.-based BHI’s Haiti staff already at work doing damage assessments at hospitals and a few schools, was on a mission to help coordinate the logistics of the nonprofit health care infrastructure consultant’s recovery efforts—from offloading and delivery of emergency equipment flown in from the U.S. to constructing a temporary trauma and orthopedic surgery center to treat the injured. 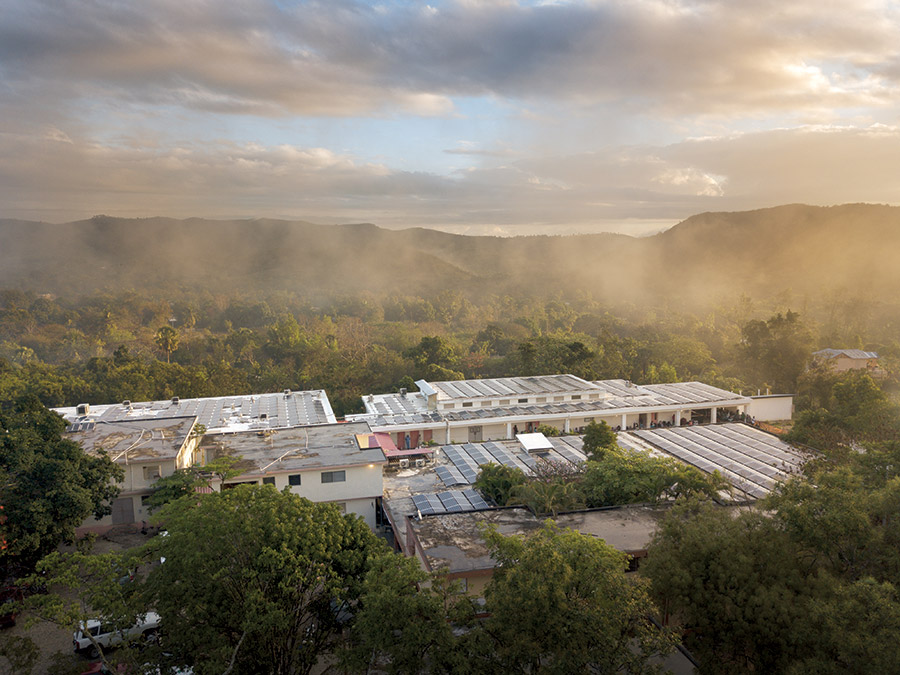 Desrosiers, a BHI project manager with a background in facilities management, was also hand-delivering critical surgical supplies to Saint Boniface Hospital in Fond-des-Blancs, expanded by BHI for the nonprofit operator, Health Equity International. The HEI complex has solar power and seismic and hurricane resistance—hallmarks of BHI designs for health care facilities in under-resourced regions. The hospital had survived the quake relatively unscathed, as had the more than 15 BHI projects in the disaster zone, of a total of 60 built in Haiti since 2010. 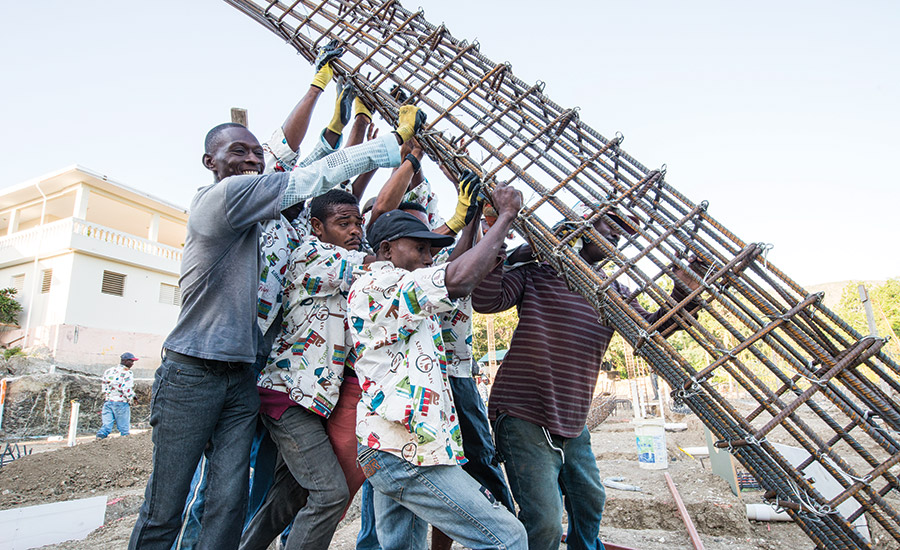 A silver lining of the earthquake is that it had tested—and proven—BHI’s strategy of delivering high-quality, sustainable and resilient health care infrastructure. The group has its roots in Haiti, a Caribbean nation of 11.6-million people, notorious for subpar medical services and construction (see p. 23).

A full-service consultant, BHI also helps its nonprofit clients, which it calls “partners,” develop clinical plans and operational budgets. And it often operates and maintains the projects—not a simple job in areas that have broken supply chains and few spare parts.

BHI’s mission is to “enable dignified, affordable and high-quality health care” for all “regardless of location or a patients’ ability to pay.” It fulfills its mission in low- and middle-income regions outside the U.S., primarily in the Caribbean and Africa, but also in Peru.

“If you are not motivated by the mission, you don’t put up with the tough conditions” that make U.S. work seem like child’s play, says Jim Ansara, BHI’s co-founder, managing director and main driver.

BHI is “unique” in this arena, says Conor Shapiro, HEI’s president and CEO. No one else is “dedicated to high-quality cost-effective [medical] buildings,” he adds. 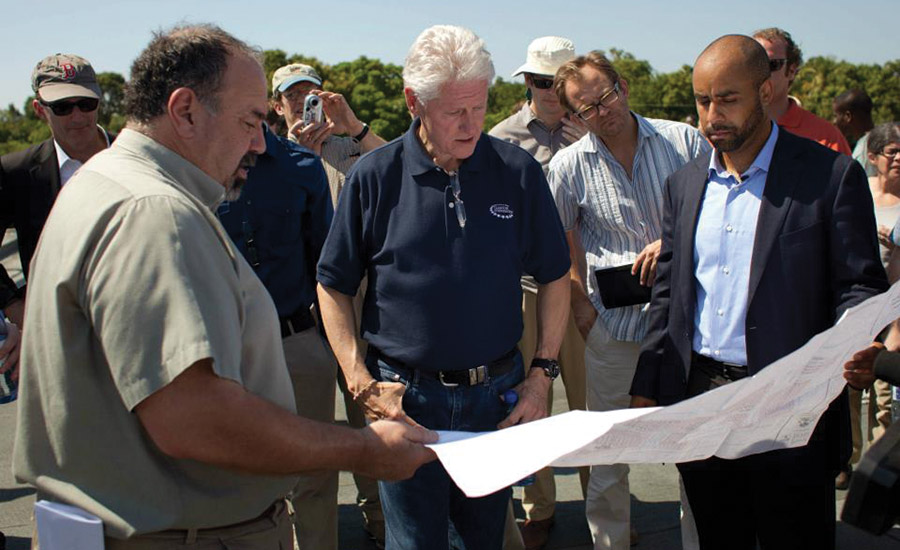 At the airport outside Les Cayes, the 30-year-old Desrosiers got a ride to the city center in a truck full of food going from a mission in Les Cayes to St. Louis du Sud, a hard-hit area between Les Cayes and Fond-des-Blancs. In Haitian Creole, he struck up a conversation with the driver, who shared that the quake had killed two of his children and his mother. His wife survived, but with a crushed arm.

The driver’s staggering losses hit close to home. Though Desrosiers was born, raised and is living in Plymouth, Mass., most of his father’s family, whom he knows from visits to Haiti since he was 11, live in the quake-torn village of Robert, an hour by car from the city of Jeremie and then a two-hour hike up a mountain.

Desrosiers’ extended family was lucky by comparison to the driver’s family. Though they had lost everything material—their homes, their bakery business—no one had lost life itself. “They were outside when the quake hit” at 8:30 a.m., says Desrosiers.

The driver’s plight further strengthened Desrosiers’ resolve to aid the less fortunate. “Being a part of a community of local and international members that live and breathe the impossible every day is both my inspiration and motivation,” he says.

The work helps save lives by allowing “clinicians to practice medicine and not be hamstrung by their environment,” adds Dr. David Walton, BHI’s co-founder, former CEO and current advisor.