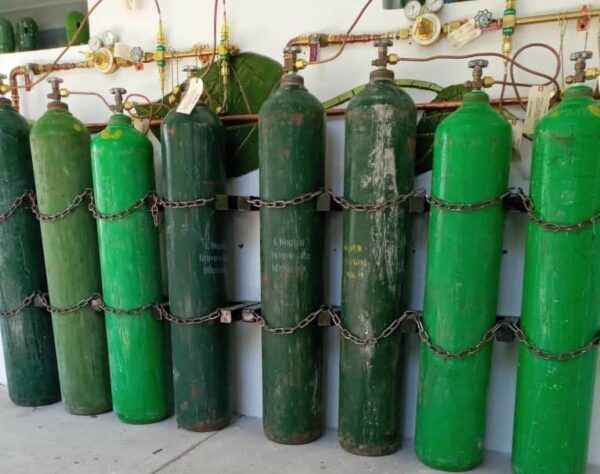 It’s never been clearer how essential medical oxygen is.

Currently in India, amid a devastating surge in Covid-19, dire shortages of oxygen are leading to relatives searching desperately for supplies, hospitals pleading for oxygen on Twitter, accusations of hoarding, and some people even turning to theft. In Peru, another country badly affected by Covid-19 at the moment, people have been queuing for up to three days, and paying up to three times the usual price, to refill oxygen tanks.

As with so much of the pandemic, the widely varying levels of medical oxygen around the globe have shown how unequal access to medical supplies is. The World Health Organization (WHO) estimates that currently 1.1 million cylinders of oxygen are needed just in low- and middle-income countries (LMICs). This is 13 times as much as the normal requirement.

But the normal requirement wasn’t being met even before the pandemic escalated the need. One estimate is that pre-pandemic, only 20% of patients in LMICs who needed medical oxygen actually received it. Only 10% of hospitals in these countries even had access to pulse oximetry (which measures the level of oxygen in the blood) and oxygen therapy. These better-resourced hospitals tended to be larger and located in cities.

So the disparities in access to oxygen, which is on the WHO’s Essential Medicines List, have affected many other conditions than Covid-19. These include pneumonia, asthma, malaria, and sepsis.

Inobert Pierre, the director general of St. Boniface Hospital in Fond-des-Blanc, Haiti, reports that at his hospital, “Heart failure, pneumonia, tuberculosis are among the most common causes of oxygen big usage. During the highest spike of Covid, our oxygen consumption had doubled. We had to increase our cylinders as the other services still requested oxygen.”

As the demand for this essential therapy has risen during the pandemic, so has the price. The fluctuating prices and dwindling supply are especially worrying as the countries that have been left behind in the global vaccine race are also the ones that will need oxygen the most as the pandemic stretches on. In its Covid-19 center in Aden, Yemen, Médecins Sans Frontières (MSF) reports that each bottle of oxygen it receives costs 11 euros – and the center uses 250 bottles a day.

In countries including Chad and South Sudan, access depends on private sellers who source the oxygen from abroad. The support of governments and private companies can make it easier to import and commercialize oxygen; this is happening in Peru, according to Leonid Lecca, the executive director of the health nonprofit Socios En Salud.

In Port-au-Prince, Haiti, an importer brings in liquid oxygen from Florida, says Jim Ansara, the managing director of the global health nonprofit Build Health International (BHI). Transporting this onward throughout the country can be tough because of remote locations and civil unrest.

Globally, the challenges to producing and distributing medical oxygen are financial as well as logistical. The technology to concentrate oxygen from the air is lacking in a number of countries, as is the technical expertise to maintain and operate equipment. There’s a massive need for more training of people, alongside the infrastructural development for more oxygen.

But the basics can also be missing. Poor roads are an obstacle to transporting oxygen, while spotty electricity access – common in many places – challenges piped oxygen systems. Ansara comments, “When I start talking about energy infrastructure, people glaze over, because it’s somebody else’s problem or that’s too big an issue to talk about. But you can’t do healthcare, dignified, effective healthcare without electricity.”

Thus, some innovations involve solar power or backup generators to ensure a steady supply of energy. For instance, BHI has devised the OxBox, which consists of bedside oxygen concentrators, a battery that can smooth out an unsteady electricity supply, and a solar array or generator. This kit was designed to be assembled quickly with limited technical expertise. “We wanted to be able to get oxygen into the field really quickly in rural areas,” says Ansara. Similarly, early in the pandemic, the WHO focused on sourcing and sending emergency oxygen supplies, in the form of oxygen concentrators and pulse oximeters.

But the emphasis has moved on toward ensuring a more reliable and sustainable supply by supporting local production. In February 2021, the WHO launched the COVID-19 Oxygen Emergency Taskforce. This called for $90 million of funding in response to urgent needs in low- and middle-income countries.

Ansara’s frustration with the slow pace of change is clear. “There’s been hundreds of white papers…but there’s been relatively little actual sustained investment and development of oxygen infrastructure,” he says.

He believes that it’s much more appropriate to focus on a long-term supply of oxygen, rather than emergency solutions like even BHI’s own OxBox. For one thing, some of the OxBox components, like its Tesla battery, have gotten very expensive and hard-to-source. And while Covid-19 hasn’t hit certain low-income countries as hard as was feared early on, Ansara says that affected patients have required more oxygen than was initially predicted. With such high levels of hypoxia, or insufficient oxygen in the tissues, self-contained oxygen-producing units haven’t been able to meet the full need in the way that a piped, in-wall oxygen supply would. Ansara says that in weak healthcare systems, by the time people reach a hospital, they’re extremely hypoxic. A bedside oxygen concentrator pumping out a maximum of 10 liters of oxygen per minute just isn’t enough. And medical staff may need to ration out that precious oxygen if they only have a limited supply, leading to worse health outcomes.

Ansara is also cautious about the more durable oxygen concentrators that are being developed, to limit the harms of dust, heat, and humidity on this equipment. “They’re not a long-term solution, they’re a Band-Aid,” he believes.

Compared to portable oxygen concentrators, oxygen generators can pull much more oxygen from the air, at a rate of about 5,000 liters an hour. But they’re much more expensive and require specialist training to operate. They’re also manufactured in only a few countries, and have become harder to source as demand has risen during the pandemic. Shipping an oxygen generator from Shanghai to Aden, as MSF has illustrated, is a long and cumbersome process, involving quarantine in multiple countries and a lengthy installation period.

Oxygen generators often use pressure swing adsorption (PSA), which involves separating nitrogen and oxygen from the air and concentrating the oxygen. Ansara is advocating for investment in PSA and vacuum swing adsorption (VSA) plants.

He enthuses, “Having oxygen right in the wall right above the patient’s head, just being able to plug a hose and put a mask or nasal cannula [a tube that delivers oxygen to the nostrils] on that person, just makes such a difference. And we have not been able to get many people other than clinicians interested in the idea of large-scale investment in oxygen pricing, or looking at how to do oxygen piping more inexpensively.”

It’s challenging but feasible, Ansara says. Early in the pandemic, BHI worked on integrating a piped oxygen supply into every bed of Haiti’s national teaching hospital. This project was implemented quickly, with an all-Haitian team and a cost of only $300 per bed. “It can be done,” Ansara insists. But scale-up will depend on also improving energy infrastructure and training of local personnel.

At St. Boniface Hospital, Pierre would also prefer a piped supply, although that’s not yet on the cards. The staff use an oxygen concentrator that can fill 10 cylinders every 24 hours; they have 100 cylinders in total. If they have a problem with this system, they can get the cylinders refilled in Port-au-Prince, where thankfully prices have been stable for the past six months (though they depend for instance on the exchange rate). To get to a point where they don’t have to worry about their oxygen supply, the hospital would need another concentrator with a higher capacity than their decade-old device, as well as twice as many cylinders.

A piped supply can also come from liquid oxygen, which in Peru supplies the higher-level hospitals, Lecca reports. However, hospitals have around 70 oxygen plants, while “the ideal is to have around 200 oxygen plants nationwide.” In addition to more oxygen plants, the country needs more temporary oxygen centers: establishments that can be set up in a month or two, which cater to patients with mild to moderate cases and relieve the pressure on the swamped hospitals. As well, Lecca explains, “The ideal is to have a flexible liquid oxygen production capacity available in each region of the country. Flexible refers to increasing during peak demand. This could be at the expense of reducing industrial oxygen production and producing more medicinal oxygen, which under normal conditions only represents 20% of total oxygen production.”

The goals are clear, and they should be reachable with enough political will and financial commitment. In general, Ansara says, “I hope that the wealthy countries are now realizing that global health affects everybody, and that we have to invest in health systems across the globe. If Covid has taught us anything, I hope it’s teaching us that.”

Surely if we can synthesize oxygen on Mars, we should be able to ensure enough for everyone on Earth.