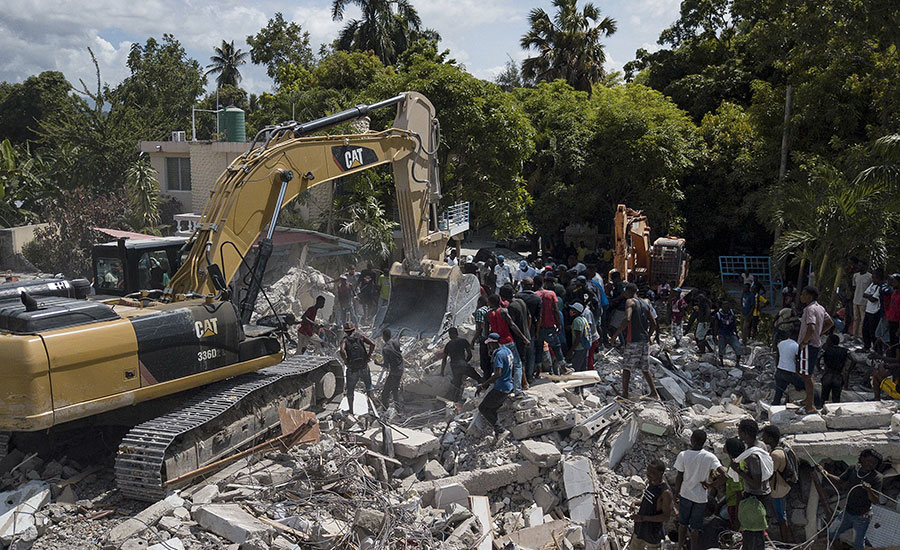 More than 1,500 people are confirmed dead and an estimated 6,000 others injured from the magnitude-7.2 quake, which the U.S. Geological Survey says occurred 78 miles west of the capital of Port-au-Prince at 8:29 am local time, Saturday, Aug. 14. Measured to be somewhat stronger than the magnitude-7.0 quake that crippled Haiti in January 2010, Saturday’s event, centered in the country’s mountainous, less densely populated southern peninsula, caused widespread damage to buildings and infrastructure. Haiti’s Civil Protection Agency reported on Sunday nearly 13,700 homes were destroyed, and another 13,800 sustained damage.

Most information on the quake’s effects has emerged from the coastal cities of Jeremie and Les Cayes, where social media posts have shown collapsed and heavily damaged two- and three-story buildings. The main road connecting the two cities was reported to be impassible due to landslides and cracked pavement, while broken underground infrastructure lines flooded parts of Les Cayes.

USGS also reports post-event satellite imagery revealed hundreds of landslides, many of which have isolated large sections of the southern peninsula. Those conditions could be worsened by tropical depression Grace, which was forecast to skirt the southern coast of Hispaniola, Monday and Tuesday. According to the National Hurricane Center, Grace is forecast to bring 5 to 10 in. of rain to the area as it moves westward, with isolated maximum totals of 15 in., increasing the likelihood of rural and urban flooding, and additional landslides.

The region has already experienced several aftershocks of magnitude 5.0 or greater, USGS says. More are expected in the coming weeks, though the agency considers the chance that Saturday’s event could be part of a sequence that includes an even larger quake to be “very small.”

Assistance is already making its way into hard-hit areas, with the U.S. Agency for International Development having deployed a disaster assistance response team to perform damage assessments, prioritize needs and coordinate with humanitarian partners.

Build Health International, a nonprofit based in Beverly, Mass., that delivers and maintains health care projects in underserved communities, has mobilized to provide rapid assessments and repairs to restore the southern peninsula’s healthcare infrastructure. BHI’s experience in Haiti includes building more than 60 projects since the 2010 quake.

“All the major BHI partner hospitals have seen little to no structural damage and are accepting patients,” said Jim Ansara, BHI co-founder and managing director, in a letter emailed Aug. 15 to the BHI community.

Ansara added that BHI’s team of mostly Haitian engineers, architects, logisticians, contractors, electricians and plumbers is mobilizing to get supplies and specialists to people as quickly as possible.

Read the rest of the story here.