This story was written by the CURE International editorial team, and published online on April 22, 2019

During Niger’s hot season, it’s not uncommon for people to follow up their traditional greetings with, “Et la chaleur?” (“And the heat?”). People nearly always respond to this question with a smile and a small groan.

The heat. In a land covered by the Sahara Desert, the heat and the sun are a significant part of everyday life, and people living in Niger generally try their best to avoid both. However, CURE Niger has recently come to appreciate the sun’s overwhelming presence in this country when they finished installing a new network of solar panels!

The idea of a solar power installation at CURE Niger had been discussed and considered for a long time. It seemed like a great solution to the problem of unstable and costly electricity. Frequent power cuts disrupted operations, and power fluctuations negatively affected expensive medical equipment. Inevitably, the cost of supplying the entire hospital with electricity grew high. The hospital did not have stable electricity, but it had an abundance of sun. Finally, in 2015, our former Executive Director, Josh Korn, began working on a grant application for the project with USAID’s ASHA (American Schools and Hospitals Abroad) program.

Fortunately, CURE Niger was not alone in this project! First, we received the grant from USAID for over $400,000, which enabled us to hire Build Health International (BHI), who helped design and implement the project. In recent years, the Niger government has become very interested in solar energy and readily granted authorization for CURE Niger’s project.

Even with the help of these organizations, building an independent solar panel system was a long process! Parts had to be ordered and shipped to Niger from various countries, technicians came to study the ground and install the system, and structures had to be built for storage purposes. After years of coordination and hard work, CURE Niger’s dream has finally become a reality!

Once the solar panels were all in place, we celebrated with a dedication, complete with a ribbon cutting! 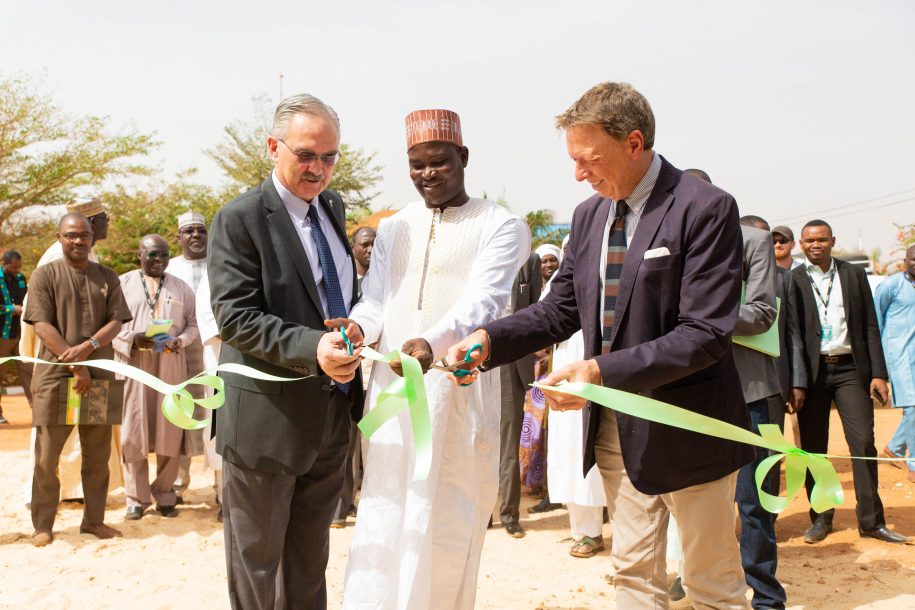 The new solar panel system allows CURE Niger to be completely independent of the local electrical grid while providing CURE Niger with electrical stability that enables the hospital to run more efficiently. Furthermore, the system was built to expand as the hospital grows, so it will provide CURE Niger with stable power in the future as well as the present! The hospital’s electricity bill has decreased from $5,000/month to the current $2,000/month needed for maintenance of the new solar panel system. Since it takes approximately $1,000 to fund one surgery, CURE Niger is now able to fund the surgeries of 36 more kids each year with the $36,000 they save annually!

The benefits of this new solar panel system are incredible and have allowed CURE Niger to expand their vision. The money saved on electricity, along with the stability provided by the new system, enable CURE Niger to “heal the sick and proclaim the kingdom of God,” more effectively than in the past. What a gift this new solar panel system will be to the community in and around CURE Niger. Will you join us in praising God for His faithfulness?